One of the most iconic salads 🥗 worldwide that the Greek cuisine has to offer. Greek salad is an example of how the Mediterranean cuisine transforms simple ingredients into a delicious dish. Also known as horiatiki in Greek, which means village-style, it can be found everywhere throughout Greece, with some small variations.

It is best served from late Spring to early Fall/Autumn, when its ingredients are seasonal and top quality. A healthy, great meal for the warm days and nights of Summer.

🤔 What is horiatiki salad?

The most common version of the traditional Greek salad has slices of tomatoes and cucumber, onion, green peppers, olives, and is topped with feta cheese, olive oil, salt, and oregano. Sometimes, capers are added, or other types of cheese, but no greens like lettuce or kale.

Tomatoes: Use any kind of tomato 🍅 that you love. I suggest cherry or vine ripe tomatoes. They should be firm but juicy, and preferably in season. Cut them straight into the bowl, to keep their juices in the salad.

Cucumber: Use an English cucumber 🥒 or mini seedless cucumbers. Cut them into slices.

Cheese: Typically, when we talk about Greek salad, feta cheese is the common choice. Typically, a large block of feta is added at the top, but we can also cut it in large or smaller blocks. There are also variations that use other types of cheese, such as mizithra, xinomizithra, or anthotiro.

Onion: Red onions 🧅 are used in this recipe. The Greek red onions are very sweet and not very spicy. Slice it in half, and then thinly slice it in half moons.

Olives: Black Kalamata olives are commonly used, but other varieties are used, depending on the geographical location and availability.

Herbs: Dried oregano is the most common herb used, but you can also use dried thyme.

Spices: Salt 🧂 and pepper, according to your taste and diet preferences.

For a more rustic, traditional style, cut tomatoes and cucumbers in large chunks.

Don't add too much salt, because feta cheese and olives are already salty.

Buy the best quality products available that you can afford. I am using organic ingredients.

Soak the onion slices in cold water for at least 15 minutes, to reduce their sharpness. Dry them between two kitchen towels before adding them to the salad.

Use feta in brine for the best results.

There are countless of options, and it pairs perfectly with almost every Greek Summer dish.

Serve it on its own with some bread 🥖 as lunch or dinner. Or serve it with grilled meat 🥩 or fish 🐟.

It's a fresh salad, so better not to. But if there are leftovers, drain the dressing, place it in an airtight container in the fridge, and consume it as soon as possible. 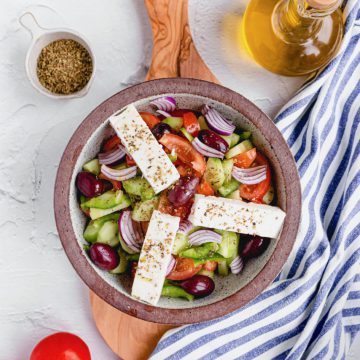 Variations include the use of mizithra, xinomizithra, or anthotyros instead of feta. If you can find Greek oregano, use it. It is more fragrant and tasty than other varieties.
Keyword quick, traditional

Leave a comment and star rating ⭐ in the section below ⬇️

❀ Hi there, I am Georgia. Welcome to Foodathlon, the place where the Mediterranean flavors meet your kitchen! As a Greek, I'm in love with Mediterranean food & I'm happy to share with you my traditional & modern recipes, often twisted to comply with food allergies & intolerances.