This delicious simple Spanish tortilla is a recipe that came to my hands from a Spaniard. I am so happy and blessed to have Spanish neighbors in the Netherlands.

Sakis and I love Spain, especially in the summer. It is one of our go-to holiday destinations. Not only because of the great weather and the beautiful attractions but also because the food is delicious. Food is always an important factor in our destination bucket list.

So I am very lucky that I can learn some secrets from this beloved Mediterranean cuisine from a native, and Mrs. Pepa Moreno gave me her recipe along with some great tips and advice about this Spanish favorite.

What is a Spanish tortilla?

It is an essential part of Spanish cuisine. Made primarily with eggs and potatoes, some seasoning, and, optional, onion which apparently is a big debate issue in Spain. Two large groups of people exist the concebollistas (those who add onion) and the sincebollistas (those who think that adding onion to a tortilla is an attack on the original recipe). Every Spanish house has its own different recipe adding more or fewer ingredients.

The original recipe was created around 1500 AD when the potatoes arrived in Spain from the Americas and it quickly became very popular because of its simplicity and deliciousness. Spanish tortilla is often served as a tapa and it is celebrated as the national dish by Spaniards.

Ingredients of the Spanish tortilla

Eggs: I use organic large eggs to make this recipe. They add more color and they are delicious.

Potatoes: A starch type of potato is the best to make a tortilla. Use Russet (international) or Nicola (NL). The success of a tortilla relies on the carefully cooking of the potatoes.

Onion: Optionally the tortilla can include onion, lightly caramelized in the pan, before adding it to the potatoes and eggs. Favor white or yellow onion for the best result.

Seasoning: A good amount of salt and some pepper are enough to elevate the flavor of the eggs, onions, and potatoes.

The potatoes are a critical element and their texture plays a significant role in this recipe. Simmer them in olive oil until extremely tender and soft.

Flipping is the part that I dread, but if you wiggle and shake the pan, the tortilla comes off easily. Place the tortilla on a large plate and flip it quickly.

You can always bake the tortilla in the oven. Although in this case the taste and texture are different because the eggs are cooked all the way through.

If you want a lighter tortilla then cook the potatoes in the microwave. Place them in a glass bowl with some olive oil and the onions (if used), and microwave for 14 minutes (check the softness and mix them midway).

Season the tortilla mixture with salt and let it rest for ~ 15 minutes. This is to ensure that the whole mixture is properly salted.

Serve the Spanish tortilla warm, cold, or optimally at room temperature as:

Serve it plain or top it with:

The tortilla can last up to 3 days in the fridge. Let it cool completely and store it in an airtight container. You can reheat it in the microwave, in the oven, or eat it cold.

Looking for other delicious breakfast ideas? 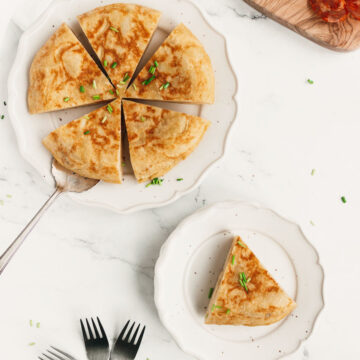 For an easier flipping of the tortilla, split the mixture into two and use a smaller frying pan. The best pan size to use for the given amount of this recipe is 22-24 cm/9-9.5 inches. For evenly vegetable-cut slices, use a mandolin. Serve the tortilla plain or with cheese, chorizo or Serano ham, and any sauce of choice. Store in the fridge for up to 3 days.
Keyword Appetizer, potatoes, snack, Spanish omelet, tapas, tortilla

Have you tried this recipe?

Spread the love and mention @foodathlon_ or tag #foodathlon on Instagram

Leave a comment and star rating ★ in the section below

❀ Hi there, I am Georgia. Welcome to Foodathlon, the place where the Mediterranean flavors meet your kitchen! As a Greek, I'm in love with Mediterranean food & I'm happy to share with you my traditional & modern recipes, often twisted to comply with food allergies & intolerances.